I just found myself disagreeing with me. I reread a blog post that I had written a week or two ago that was posted on the Shopzilla blog, and noticed that I had written that “metadata is as important as the primary data (well, close enough that the difference doesn’t really matter)”. That was wrong. There is actually no difference in importance between the two. This is because importance is actually binary: either you have to do something, or you don’t.

I’ve found myself using more fine-grained definitions of relative importance of things before, and I thought it was a good thing to do. Having different severity levels for bugs, for instance, felt right: there seemed to be a difference between a blocker, a normal-level one and a cosmetic bug. Over time, I’ve come to realise that there are only two classes of bugs: those you can live with and those you can’t. The latter must be fixed, the former don’t have to be. And the corollary of that is that it’s always going to be more important to add another feature than to fix a bug that you can live with, so the bugs you don’t have to fix should just be put into some bucket where they can live undisturbed forever.

I remember some years ago, when Microsoft released a Windows version that had something like 35,000 known bugs in it, and how some people were upset about that. “How can they release something that has so many bugs?” I think that is (or at least can be) a perfectly OK thing to do, it just means that you’ve tested your software thoroughly and know the quality status of it. The remaining bugs are things you’ve decided not to fix.

Getting back to the topic of priority again: that is another thing, it’s not the same as importance. I think of it as a two-dimensional thing, where importance is one axis and urgency is the other. Say you have five things to do, A through E. As soon as you get E done, you’ll increase your revenue by around 3%, but before you can do E, you need to do D. A is a bug that you really want to fix, B is a document that you ought to write according to the company standard process, but that nobody will ever read, and C is a bug that you in all honesty don’t need to fix even if it annoys you. This diagram shows how I would do prioritisation in that case. 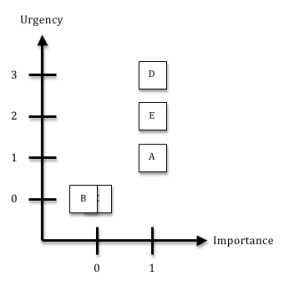 The unimportant things get an urgency of zero. We don’t need to do them, so let’s just not do them (although the best thing to do about that document is to change the company process that requires doing work that is wasteful). The urgency values assigned to the important things are based on their intrinsic value and on dependencies between them.

I’ve been guilty of the sin of having lots of half-finished items on my daily todo-list. Often, the reason why I didn’t finish those things was that they were actually not that important, but I still didn’t take them off the list. This led to more stress and ‘mental overhead’. It is a common situation, I think. I also think it is very detrimental to productivity. If you want to be great at executing, I think that a certain ruthlessness about deciding what should be done – and more to the point, what should not – and lots of discipline about actually doing it is necessary. Here are two rules I try to follow:

This entry was posted on January 29, 2010, 17:48 and is filed under Software Development. You can follow any responses to this entry through RSS 2.0. You can leave a response, or trackback from your own site.